“…I was a member of a secretive international magical society for five years, and on my initiation to (what I then believed to be) the highest and scariest of its grades, it was revealed to me by my order-superiors that Dumbo Tim Leary/ RAWilson style. I don’t believe that it would be a significant violation of my magical oaths to drop a hint or two concerning the “initiated” reading of this movie. (I bloody well hope it’s not a violation of my oaths – they were pretty darned specific about what the painful and bizarre consequences would be.)

In the story, Dumbo’s mutation is considered to be a useless, freakish handicap. The potential power that Dumbo possesses goes unseen, by him and by everyone else, in the social reality-tunnel of the world he’s born into (the “circus”). He ends up fulfilling the lowest of the roles available to him in that reality-tunnel: the clown; the “butt”, in fact, of the other clowns’ pratfall routines, good only for being on the receiving end of a custard pie (“Shit-Dumbo! Ass-elephant!”). Dumbo then happens to accidently ingest a hallucinogenic drug. A psychedelic vision ensues…his reality-tunnel breaks down…and joining him for the ride is his “familiar”, a set of eyes that doesn’t belong to the circus, a small voice that tells Dumbo a different “story” about who he is… A gap in memory. And the next thing Dumbo remembers is waking up at the top of a very tall tree. How did he end up here? His “familiar” guesses the truth: He flew. Dumbo has the power of flight. That’s what his big ears are for.

At first Dumbo finds it difficult to change his perception of who he is; of the extent of his powers. His familiar introduces him to the world of “ceremonial magick”, and with the assistance of a magickal prop, Dumbo manages – without the use of drugs – to fly. Eventually, Dumbo manages to manifest his powers even without the use of the paraphernalia of ceremonial magick.

And the heaviest of animals takes to the sky.

The nightmarish “pink elephants” are just those parts of ourselves – the scary, powerful parts – that we forgot to include when we were drawing the map of who we are. Ganesha breaks the gravity-chains, smashes through the cages of the circus, soars above the train. A vision of our Mercury-nature so compassionate, so gently teasing, so *loving*, that it makes me break down crying.” 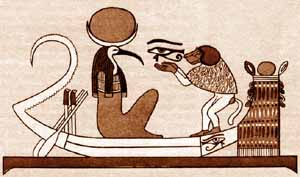 …In the Egyptian story, Thoth looks out for his sister’s kid.

…And in the Greek accounts, Hermes often plays a role analogous to that of Mr. Stork. He takes charge of several of Apollo’s children at their birth; when Dionysus is miraculously born, it’s Hermes who carries the child to Orchomenus and delivers him into the hands of Ino; and after Pan’s mommy runs screaming from the monstrosity she’s just brought into the world, it’s Hermes who wraps the reject infant up warm and flies him off to Olympus, where the gods are delighted by the kid’s novelty. 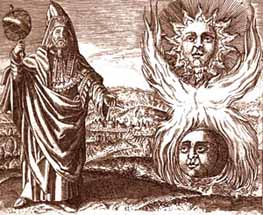 Why an elephant? I’m not sure I can give you a full answer to that one. I left the Seekrit Klub-howse before I got that far. But I feel that it’s at least partly because the elephant that learns to fly – like the alchemical “shit into gold” or “ice into fire” – serves as an apposite metaphor for the Great Work (“I been done seen near ‘bout everythin’…when I see an elephant fly…!”) And is an expression of a particular kind of “crazy” optimism… Even when things seem utterly dark and hopeless, and you’re at the bottom of the worst kind of gravity well, and it seems like all that’s left to do is collapse into despair and apathy, the Initiate will gamble that “maybe the damned elephant can fly!”

The investigations of one element within The Company might throw some light on the pachyderm-Horus connection (although, to complicate matters, this element actually tended [tends?] to consider Dumbo as being a representative of Set – something to do with Dumbo’s pschent being all white, or something).

Anyway…this study group consisted of a number of members who were interested in a story about one of Buddha’s adventures. At first glance it just seems like your common-or-garden “miracles of the saints”/ “our guy defeats the baddies” type yarn. One of Buddha’s enemies, his cousin Devadatta, gets an elephant drunk and then sets it free in the streets as B is strolling through town. The elephant goes mad, trampling on carriages and passers-by, smashing houses, spreading panic, and is about to kill a little girl crossing the road when B commands it to stop, whereupon it kneels down before him.

Now, the study group, informed by their understanding of the “pink elephants” sequence in Dumbo, eventually came to treat the Buddha story not as a simple morality-tale but rather as a description of a particular magical/ psychological/ alchemical operation – the details of the operation being encoded in the narrative, not unlike the idiom used by the old alchemical texts.

The members of this “antinomian” study group identified themselves with Devadatta, and interpreted the introduction of the drunken elephant to the city streets as referring to the introduction of a “dis-ordering” agent into the repressive, stagnating “natural order” or status quo. This preliminary chaos was necessary, they believed, before one could hear “the voice of the Buddha”. While they styled themselves as “antinomian” and “LHP”, it would be inaccurate to suggest they read the story in terms of Devadatta vs. Buddha – rather, each element of the story was considered in pragmatic, practical terms, as a stage in the “alchemical process”. That process was treated and applied in various arenas, from the personal to political. (I should add that, unlike many within the order, they rejected the more literal interpretation of these stories, believing that the use of drugs was incompatible with true self-evolution). They also dabbled in a more cynical interpretation of these stories as a kind of “how to brainwash people” text.

I remember a hand-made Tarot card that a member of the study group showed to me once (this was not one of the “official” cards that were sometimes used in initiation ceremonies in the order as a whole). The card, a version of the traditional “Lightning-Struck Tower”, portrayed instead a pink elephant crashing through a city, demolishing buildings. I remember admiring the colours on the card, and how the pink of the drunken elephant complemented the martial red colour-scheme used by the artist.

Atu XVI – “The Tower” – is, of course, the major arcanum belonging to the war gods, including Horus.